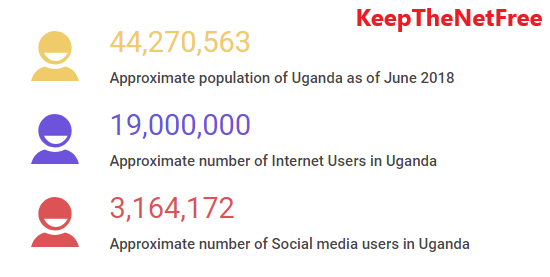 The government claimed that it passed the legislation in order to raise revenue so as to offset the huge Ugandan national debt. Activists, lawyers and the people of Uganda have however argued that this is a move to further curtail the already existing freedom of expression.President Yoweri Museveni had pushed for the changes in a letter to the cabinet, arguing that social media encouraged gossip.


Rosebell Kagumire, a human rights activist and blogger said,It’s part of a wider attempt to curtail freedoms of expression.

With the already exorbitant Internet prices in the region, this move by the government will only keep the offline in continued digital darkness.

This move is without a doubt an attack on the freedom of speech of the Ugandan people which is clearly protected by their constitution in Article 29 (1)a of the Ugandan Constitution as well as other International and regional legal instruments that Uganda is a party to.

Article 29(1)a, of the Ugandan constitution provides that, everyone shall have the right to freedom of speech and expression which shall include freedom of the press and other media.

Other East African countries have also passed controversial laws regarding the cyberspace.On November 29, the Tanzanian government won judicial proceedings against opponents of new regulations that require bloggers to pay a fee and disclose their financiers.The Kenyan government also passed, a new law on computer misuse and cybercrimes that came into force on May 30th.

Digital Grassroots calling to the government of Uganda to withdraw this law that only seeks to further abuse the digital rights of its citizens.